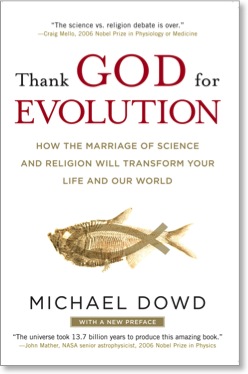 What follows is the new preface...

As we observe the 200th anniversary of the birth of Charles Darwin and the 150th anniversary of his landmark book, On the Origin of Species, evolution has become firmly established as the central organizing principle of the biological sciences. Natural explanations for the growth of complexity through time ground all the other sciences, as well, from cosmology and chemistry to neuroscience and psychology. That everything within this universe has emerged through natural processes operating over vast spans of time is now well beyond dispute among scientists and the educated public. Yet even today, families and public school systems remain divided and the evolutionary worldview is still shunned by millions, perhaps billions, of religious believers around the world. Why?

One reason is surely that big changes in thought and perspective take time to be assimilated. A deeper reason is that humans do not live by truth alone. We require the sustenance of meaningof beauty, goodness, relationship, and purpose. We require comfort in times of sorrow and suffering. We also require perspectives that encourage us to cooperate in ever-wider circles in order to solve ever-larger problemsproblems that today encircle the globe.

So long as the scientific worldview is presented in ways that ignore these basic human valuesvalues that religions excel in providingthere is little hope that the devoutly religious will appreciate science for anything more than its technological fruits. The good news is that the coming decades will see each of our religious, ethnic, and cultural stories embraced within a larger sacred context. The scientific history of cosmos, Earth, life, and humanity is our shared sacred storyour common creation myth. It is an epic tale that reaches back billions of years and crowns each and every one of us as heir to a magnificent and proud lineage. This Great Story is open to improvement, as the revelations of science yield new insights, offer new ways of seeing, and alert us to misperceptions. It is open to change, too, whenever more helpful and inspiring interpretations of the facts become available. All this is possible, moreover, without scientists needing to fear that religious interpretations will skew or shade the truth. Nor must religious peoples join the ranks of atheists.

In public lectures that distill the contents of this book, time and again I have seen faces light up when I explain the distinction between private revelation and public revelation and when I advocate the importance of both day language and night language. Both pairs help us value the contributions of objective science without dismissing the subjective realmsartistic, emotive, and spiritualthat served our ancestors for thousands of years and still vitally serve us today. During seven years of itinerant evolutionary evangelism, I have watched young and old alike delight in the astonishing fact that we are made of stardustthat the calcium in our bones, the iron in our blood, and other atoms of our bodies were forged inside ancestor stars that lived and died before our Sun was born. I have seen, too, this naturalized and cosmic understanding of death comfort those whose grief would not otherwise be consoled.

Scaling down to the inner realm, I have witnessed tearful testimonials from those freed from years of guilt, shame, or resentment after learning our brains creation storythat is, how the brain, with its embedded instincts, reflects an evolutionary trajectory from reptilian ancestors to early mammals, primates, and hominids. Others are grateful for the practical tools for improving lives and relationships that an evolutionary understanding of human nature affords. Still others have found that the supernatural claims that linger in the creeds and liturgies need not drive them from cherished traditions of their faith.

Sanity, health, and joy each emerge and are sustained only in right relationship with reality. Thank God for Evolution is thus a call to integrity, to wholeness, to sustainabilityindividually and collectively. In the year since its publication, events have validated and expanded the understanding of deep integrity outlined herein. From sex scandals in politics to crimes of greed on Wall Street, the underbelly of modernity and postmodernity is now vividly apparent. Thanks to discoveries in evolutionary psychology and evolutionary brain science, however, we can begin to improve institutions so that vital social structures can thrive despite human foibles. Equally, we can look to a future in which religious worldviews are free of the fundamentalism that fuels extremism.

How was the world made? Why do earthquakes, tornados, and other bad things happen? Why must we die? And why do different peoples answer these questions in different ways? The big questions that children have always asked and will continue to ask cannot be answered by the powers of human perception alone. Ancient cultures gave so-called supernatural answers to these questions, but those answers were not truly supernaturalthey were prenatural. Prior to advances in technology and scientific ways of testing truth claims, factual answers were simply unavailable. It was not just difficult to understand infection before microscopes brought bacteria into focus; it was impossible. Without an evolutionary worldview, it is similarly impossible to understand ourselves, our world, and what is required for humanity to survive. For religious leaders today to rely on prenatural answers puts them at odds not only with science but with one anotherdangerously so. Their resistance, however, does make sense. Until scientific discoveries are fleshed into the life-giving forms of beauty and goodness (as well as truth and utility), scriptural literalism will command power and influence.

A meaningful view of evolution is good news for individuals and families, and also for communities, nations, and our world.

It is good news at these larger levels because a sacred, deep-time understanding of history and our evolutionary heritage is the very foundation needed for facing global challenges of our own making. It will encourage us to act, moreover, with compassion and inspired dedication. I offer this book and its stories of awakening toward this noble and necessary end.

Go back | Show other stories | Send this page to a friend